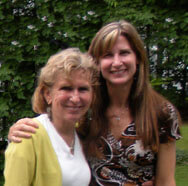 While raising a family, Carole started in the business world by selling graphic design. She then went into advertising and after 7 years as an agency owner, Carole had the opportunity to return to her first true-love, hand made art.

Carole’s daughter Gamble joined Buggy Whip in the mid 90’s. The studio was originally located in Sandy Spring, Maryland but has moved south to Sarasota, Florida. Carole and Gamble still create the creatures that make people smile in their new studio.

The line from Buggy Whip Studio is an example of American craftsmanship; a perfect blend of artistic design and function.